We know it has been a couple of weeks since our last posting, and in fact we have now finished our trip and landed in Kunming, where we are starting our next adventure learning more of the Chinese language.

We spent the last two weeks crossing the western half of China. These desolate deserts are culturally still in Central Asia, and indeed they have been part of China for only brief periods of its history. But Chinese merchants and armies have been passing back and forth along the Silk Road for two thousand years, and since the Revolution, the Chinese population have increasingly been making this their home. 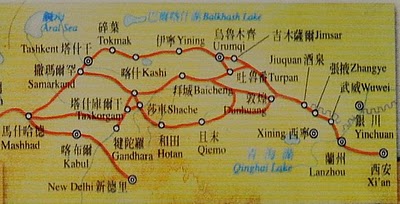 This map shows the Silk Road, which in fact was a collection of caravan routes that changed from time to time. At the eastern end, the Silk Road began in the ancient capital of Chang’an, now Xian, and then passed along the narrow Hexi Corridor around Lanzhou. Dunhuang was the last outpost of Chinese civilization, and travelers there funded one of the ancient world’s greatest art galleries as they offered prayers for their dangerous journeys.

Further west, the road split and crossed either north or south of the Taklamakan Desert. In Kashgar (Kashi) the main routes rejoined and crossed the Tian Shan into what is now Kyrgyzstan and Tajikistan. From there, the caravans could reach Samarkand, Merv, Meshad (Persia/Iran) and ultimately the Mediterranean.

We had crossed into China northwest of Urumqi and then flown back across the desert to Khotan (Hotan), as described in our last previous posting. The new postings that follow this one take us back north across the desert to Kuche, a little west of Baicheng on the above map. From there, we followed the northern Silk Road east through Urumqi and Turpan to Dunhuang and finally to Lanzhou, where we ended the Central Asian phase of our trip.

The following postings from the desert to Lanzhou are grouped in chronological order with titles starting “CN-#”. You will probably need to click the navigation panel or the “Older Postings” link at the bottom to get to the later entries.

After reaching Lanzhou, we flew south to Kunming and are now studying hard. We are looking to staying in one place for the next two months.