The Taklamakan is one of the most fearsome deserts in the world. The name means “you go in and you don’t come out,” and that was true of many early travelers. Even in 1900, most explorers ventured in only in winter with teams of camels carrying ice blocks. Those who didn’t usually lost most of their party.

Travel is easier now that China has built several highways to service its desert oil fields. A good road now follows the northern branch of the Silk Road from Kashgar to Urumqi, and two cross-desert highways link it with Khotan in the south.

Dozens of long-distance buses go every day to Urumqi, but there was only one to our next destination, Kuche. It was a sleeper bus, which meant that even though we were traveling during the day, we reclined on bunk beds rather than seats. By judicious stacking of beds just long enough for Asian bodies, the Chinese are able to fit as many people in a sleeper as in a regular bus. It isn’t exactly comfortable, but for overnight trips it’s far better than an American Greyhound. 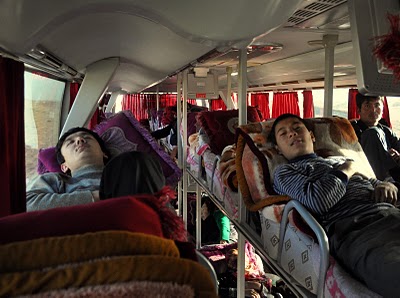 The desert was indeed remarkable. We saw no animals apart from those at the occasional road houses, and in places nothing but sand. There was no wind, so we were spared the Taklamakan’s infamous sandstorms that turn the sky black, but we could see that they could be deadly to camel riders. The road itself was lined with bands of straw to keep dunes from sweeping across.

We reached Kuche around 11pm.