After a four-hour flight, we arrived in Bishkek, the capital of Kyrgyzstan.  The airport sported a half dozen US Air Force transports, as the US shares it as a military base.

Bishkek is a sleepy little town of just under a million people, with tree-lined streets and a decent chain department store.  Lying at an elevation of 800 meters (2500 feet), it is nestled at the base of a range of mountains rising up to 4800 meters (16,000 feet), roughly the height of the tallest mountain in Europe.  If it were not for the poverty and political instability, this would be a fairly pleasant place to live.

Bishkek has been in the news recently, as it was the scene of the fighting that brought down the government in April.  The corrupt dictator and his cronies allowed the police to fire on a crowd of unarmed demonstrators, killing 70 people.  The resulting mayhem forced the dictator to flee the country, but not before the crowd torched part of the “white house” seat of government.  All is calm now and they are busy repairing the damage still visible below the newly cleaned section of the top floor.

Kyrgyzstan is calm at present but considerable tensions remain in the southern cities of Osh and Jalalabad.  Those towns have historically had an explosive mix of Uzbek and Kyrgyz tribes, and the ex-dictator fomented a violent clash in June as an attempt to destabilize the weak transition government.  The plot failed, but the tensions and government weakness remain.  Fortunately, those problems are localized to a small area in the south, which we plan to bypass by crossing a pair of mountain passes to and from China.  More on that in late September.

Today we drove across the north side of the huge, deep lake Issyk-Kol to the northeast corner of the country to a town called Karakol, which is the center of trekking in Central Asia.  Karakol is a sleepy Russian frontier town that reminded us of towns in the American west that were bypassed or never reached by the freeway.  It is hard to say time forgot Karakol, because I don’t think time ever discovered it.  But it has a lovely Russian Orthodox church built out of wood in 1890 and of course a mosque.  Kyrgyzstan is nominally Muslim, though one rarely sees a veiled face or a person observing Ramadan.  Vodka is of course quite popular. 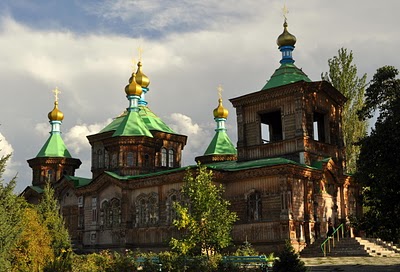 In a few hours, we will leave on this really serious jeep to go to our trailhead.  From then until September 19, we’ll be on the trail.  I haven’t been able to get my new satellite phone to send email, so there won’t be any more postings until the 20th. 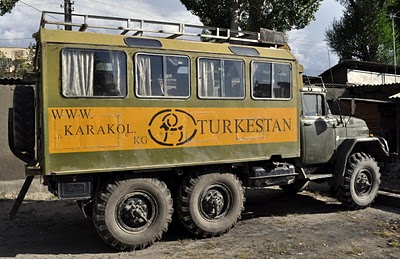 Traveling in Russia’s current and former capitals is hardly rough and ready. Almost out of necessity, we stayed in nice hotels, took taxis rather than carrying backpacks, and confined ourselves to the standard tourist sites.

Russia was a late addition to our plan. We had originally planned to fly to Central Asia via Istanbul, but it became too complicated and too expensive to go that way. I finally spotted a much cheaper route on Aeroflot via Moscow, but that required a fourteen hour layover. So if we were going to have to get a visa and spend fourteen hours, we might as well stay five days and see a bit of a great country we had never visited before. And it was a good introduction to see the imperial capitals that have so strongly controlled Central Asia for the last few centuries.

We began in St. Petersburg, the capital of Russia from 1712 to 1918. Built on an imperial scale, St. Petersburg saw the height of tsarist Russia as well as its October 1917 downfall. There are many churches and monuments to that tumultuous history. 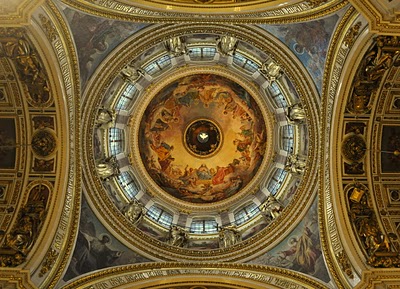 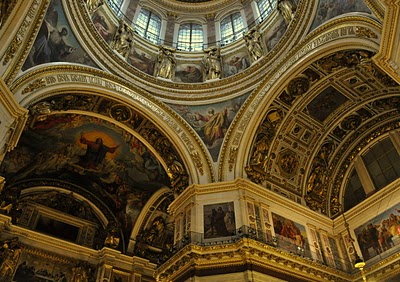 Of course we visited the Hermitage, one of the great art museums of the world. Located in several buildings of the tsar’s former palace, the building is as much on show as its paintings. It’s as if the Louvre were housed in the palace of Versailles. 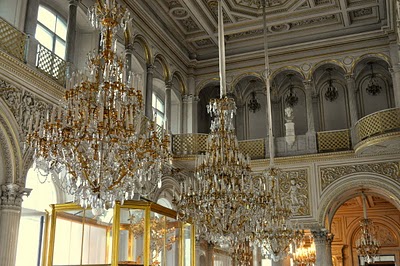 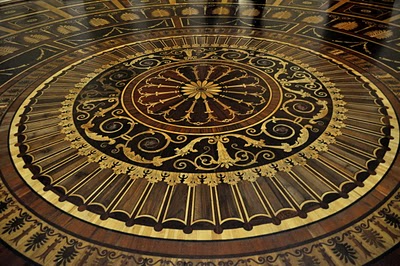 Unfortunately, some of the most interesting collections were closed for renovation. None of the rooms with early Buddhist art from Dunhuang were open, and even the Central Asian section was very thin. There were a few impressive frescos from the ruins of the Sogdian city of Penjikent, now in northwest Tajikistan. We hope to visit there in early October, but we know its art is mostly in Russian museums. 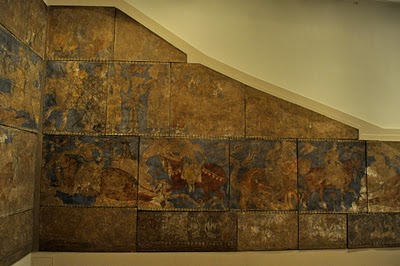 We did have one close call. On our final evening in St. Petersburg, a team of pickpockets tried to rob me as I boarded a subway train. Fortunately, I sensed trouble when one blocked my entrance into the car, and I reacted immediately when his accomplice reached for my pocket. With a quick jump, I was able to vault back out of the train past the thief, Marcia, and several surprised riders. Had I waited another second, we would have spent the first part of our trip replacing credit cards.

At the end of our time, we boarded an overnight train to Moscow. These are the finest trains in Russia and among the finest in the world. We splurged on a first-class sleeper, which was very comfortable indeed.

Moscow is also a great city, though it is painted in gritty socialist and modernist tones rather than imperial. We had only two days, so we focused on the three-star attractions at the Kremlin and Red Square.

Every visitor to Moscow takes pictures of St. Basíl’s cathedral, but we were more impressed by the interior, a cramped fortress-like structure with many small chapels. Clearly at the time it was built, the cathedral didn’t have to serve large masses of people. 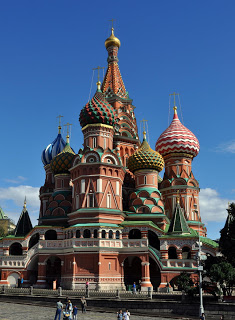 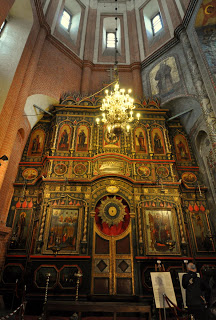 Rain clouds blew through during our entire stay, giving a good backdrop to many structures. 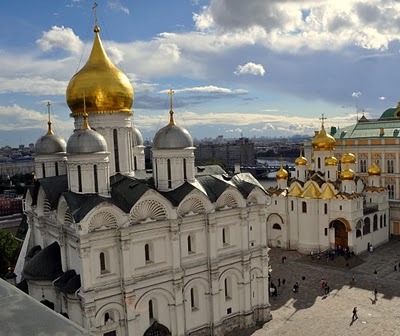 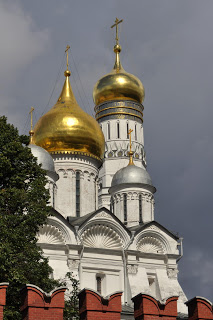 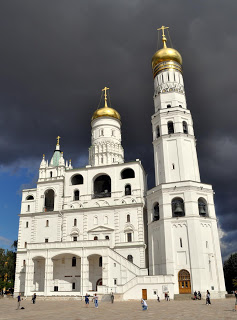 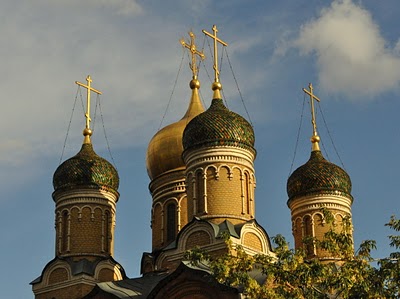 On our final afternoon, the rain became steady and we holed up in the museum of 19th and 20th century European art. Its collection of impressionist and modernist paintings beat the Hermitage by far, although it tended to stop at 1917 when the collectors began having bigger problems than art.

Even Rough and Ready Tourists need a vacation.

In fact, we had had enough of being cooped up together in a tent and we were happy to get back to North America. We spent ten days visiting friends and family in San Francisco, Portland, Spokane, Indianapolis, New Jersey and Pennsylvania, which left us happy but still tired and coming down with colds.

So it was good that we had planned to take a month off at our family’s summer house on a lake two hours north of Toronto. Our family has owned this house for over 100 years and I’ve been going up every year since I was one. Although the lake has now become a fashionable retreat for the rich and famous, we’ve left our house the way it is. So it’s still a kind of rough and ready vacation. 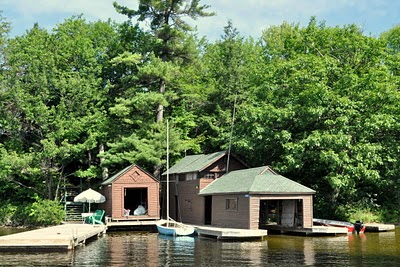 It was also a special time to spend with our family. My father turned 90 just as we were finishing our trek in Ladakh, and my mother, brothers and family members all came up to have a belated birthday party. Some of our Canadian relatives were also able to attend. So it was a really special time.

One problem arose as we were closing up the house on our last day. Marcia pinched a nerve in her hip, and an hour later I took a spill and sprained my ankle. Either could have been a showstopper for our trek in Kyrgyzstan, which starts in only one week. But both injuries are now healing well and we don’t expect them to be a problem.

At the end of our time, we drove my parents back to their home in State College, Pennsylvania, then rushed immediately to JFK airport in New York, where we caught our next flight on Aeroflot to Moscow.

When dealing with New York traffic, no matter how much time you allow, it’s never enough. We got delayed by an accident at the George Washington Bridge, and we would have missed our flight if I hadn’t broken several traffic laws. When in New York, drive like a New Yorker.

Aeroflot took good care of us. Through no fault of theirs, thunderstorms and fog shut down JFK airport, and our 7pm flight wasn’t able to get in the air until 1am. They served dinner before takeoff, allowing us to get a good night’s sleep once we finally got in the air. And on arrival in Moscow, they quickly rebooked our connecting flight to St. Petersburg. The airplane was an almost-new Airbus. It almost makes one nostalgic for the soviet-era Tupolevs.

So now that we’re safely in St. Petersburg, our plan is to spend three days around town and two more in Moscow. We will then fly to Bishkek, Kyrgyzstan for the real start of our Central Asian adventure.

One note on the blog for this fall. Although I will do my best to post pictures, it is time-consuming and probably impossible in a part of the world that has slow internet service, if any at all. So rather than hold everything up until we get back to civilization, we will make it our priority to post text stories in real time with only occasional pictures. We have invested in a satellite phone, and we might even be able to use it to send quick updates from the mountains. We will post more pictures later on when we have the chance.

We made it back to San Francisco on schedule on July 12, and we’ve been very busy since then with all the tasks of returning home and preparing for our next round of adventures. In the space of about ten days, we visited friends and family, played with grandchildren, saw the dentist, bought and organized medicines, and sorted a pile of mail over one meter high. We are now at our summer house in Canada resting and working through a series of other tasks.

One of those is of course to post blogs from six weeks of traveling and trekking in India. You have already seen a few June postings from our first few days collecting visas in Delhi, and I’ve now added one about Jaipur, which we visited around the same time.

Next, now filed under their proper times in June and July, I have added a long series of postings and pictures from Ladakh, which I hope will make up for our long silence.

I have now also rearranged the Nepal trek postings to their proper time sequence in May 2010. Please use the navigation panel at the right or repeatedly click the “Older Posts” link at the bottom of the page if you want to get back to them.