We knew that it was going to be a long train trip crossing the border from Kazakhstan to China. The books warned that it would take 32 hours to cover the roughly 1300 kilometers (800 miles) from Almaty to Urumqi, China, and the border formalities in the middle would take hours while the train’s toilets were locked.

It took all night and most of the next afternoon to reach the border. I doubt those Kazakh tracks were ever good, and they surely have seen little maintenance since the breakup of the Soviet Union. Even at speeds of under 50 kilometers per hour (30 mph), the train often lurched over bumps. In some places, it slowed to a crawl.

We emptied our bladders as we approached the border.

The first step was to change the train’s bogies (wheel assemblies). The Soviet Union used a track gauge 85 millimeters (3 inches) wider than China, which uses the “standard” gauge also used in the US and most of Europe. To do this, they moved the train cars into a special track with jacks that actually lifted each car about a meter in the air. They could then roll out the old bogies and roll in the new, set the train back down and screw everything back together. This took about two toiletless hours. 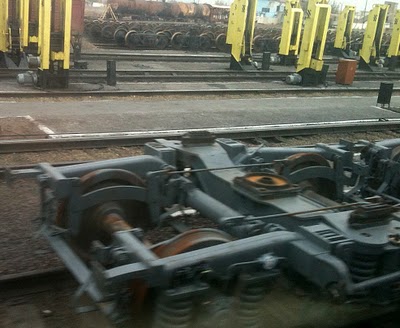 Next came the Kazakhstan customs and immigration inspectors, who asked a few questions and took our passports to their office, probably to write numbers in their books that no one will ever look at. Two and a half more hours.

The minute the train started its 20-minute journey across the no-man’s land, everyone raced for the toilets. They were locked again once we reached the Chinese border station.

The Chinese were far more careful, making us open all of our bags. Satisfied that we weren’t smuggling any drugs or subversive literature, they let us repack and took our passports into their computerized offices. While we waited, one of the policemen spotted my iPhone and came over to show off his, which he said he had cost him over $1000. We admired the cute pictures of his two-year-old son to pass the two hours we sat there.

It was after midnight when the Chinese inspectors came back with our passports and declared the train ready to proceed. The whole process had taken almost eight hours start to finish.

The Chinese tracks were much better, and the train moved quickly and smoothly. We slept soundly while the train covered the remaining half of the distance in less than eight hours. We had made it to Urumqi, an almost-first-world Chinese city that is the capital of the Xinjiang region we will explore in the coming week.

It was an experience, but next time we’ll fly.

We only visited a small corner of Kazakhstan, which has nothing to do with the movie Borat (Sacha Cohen is Jewish and speaks Hebrew despite the anti-Semitic jokes). The ninth-largest country by area, Kazakhstan is roughly the size of Western Europe, but it has only 16 million people. Large parts of the country are steppe or desert. With weather getting cold and time running out, we decided to hit only a few places along the southern frontier: Shymkent, Turkistan, and Almaty, the second-largest city in Central Asia.

Although it is no longer the capital of Kazakhstan, Almaty is a thoroughly delightful, cosmopolitan city. Trees line the streets and even the soviet-era architecture is interesting. A wide variety of coffee shops and excellent restaurants offer everything from French to Korean food. On the south edge of town are the Zailiysky Alatau mountains, which form the border with Kyrgyzstan. Just the other side is Lake Issyk-Kol, the huge lake that we drove around before and after our September trek in the central Tian Shan. 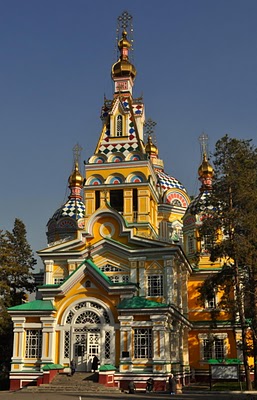 Almaty is a Russian city, and it has several lovely Orthodox churches. This brightly colored one was built entirely of wood in 1904 and is one of the few buildings to have survived an earthquake that hit a few years later.

A small wedding took place while we were there. Just as in Uzbekistan, the party had to visit several places for filming. But this time the religion was Russian Orthodox.

A service was in progess when we visited another cathedral across town, with the haunting polyphony of Russian Orthodox singing. The service was still in progress when we left almost two hours later. 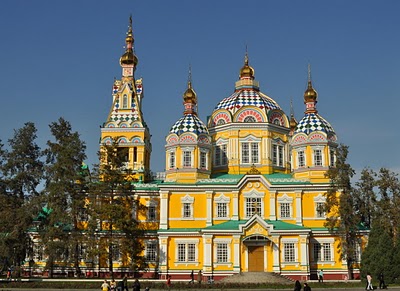 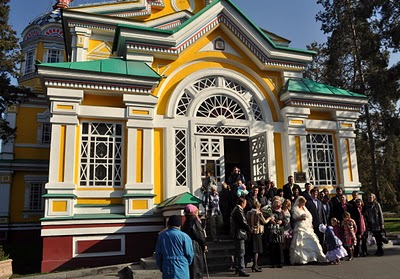 One of our adventures was registering with the migration police. Kazakhstan follows the soviet tradition of requiring registration of any foreigners who stay longer than five days. We probably could have ignored it, because we expected to leave just a few hours before the end of our fifth day. But if we were delayed for any reason, we would be subject to a huge fine or other problems leaving the country. So we went to the police office, filled out forms in Russian, paid a small fee to the cashier, and joined a huge swarm of people leaving passports for the day. At 5pm, we went back and picked up our passports and certificates in an equally large scrum. I was proud of Marcia, who pushed her way to the front of the crowd to get our documents.

On our second day, we took a cablecar up a hill south of town, which had a number of attractions for local visitors, including a Beatles memorial. 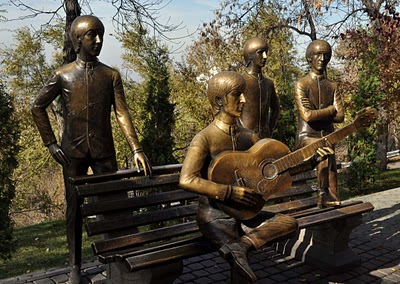 Our hotel was across the street from the Almaty Opera House, and we decided to go to a performance on our last night in Central Asia. On this Saturday night, they were playing Tschaikovsky’s last opera, a one-act work called Iolanta. Buying tickets was no problem, and the best orchestra seats cost $12. The opera house itself was a nice theatre seating about 800. Only a third of the seats were full this night, but Swan Lake was sold out the next day. It wasn’t the San Francisco Opera, but the performance was probably as professional as any western opera company between here and Tokyo. 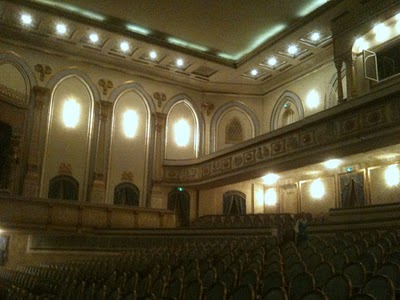 In a few hours, we will board a very slow train to leave Almaty and cross the border into China. This two-night journey will be the end of our time in “wugesitan” (the “five stans” of Central Asia) and the start of our return to China and more language study in Kunming. But we still have two weeks along the Silk Road across the desert of Xinjiang, the “new frontier” of western China. Stay tuned!

After crossing the border north of Tashkent, we spent the night in a pleasant mid-sized city called Shymkent. Although it has some history as a stop on the Silk Road, Shymkent was so fully destroyed in Mongol times that it is now just a faceless soviet town.

Our real goal was the town of Turkistan two hours to the northwest. This sleepy town has been a great pilgrimage center since the early days of Islam in Central Asia, when Kozha Akhmed Yasaui made the religion accessible by translating the core texts into local languages. Local people insist that three pilgrimages to Turkistan equals one to Mecca.

When Timur conquered the area in the late 14th century, he left his mark with a monumental mausoleum. Although the structure’s facade was never completed, its 40-meter (130 foot) arch and dome were the largest in Central Asia. The original structures are still intact with relatively little restoration. 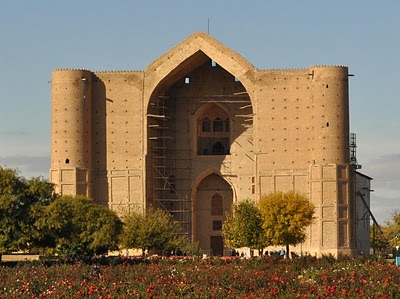 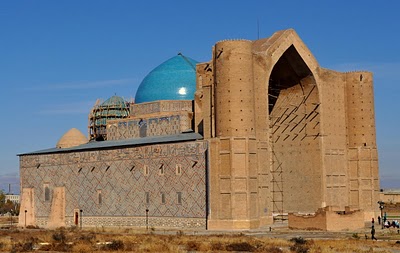 Like most Timurid structures, the walls are covered with tessellated patterns, which are in fact Arabic writing, repeating the names of Allah and his prophet Mohammed across the whole structure. Hidden in the center is the ancient swastika pattern, perhaps a throwback to early Hinduism or Buddhism. 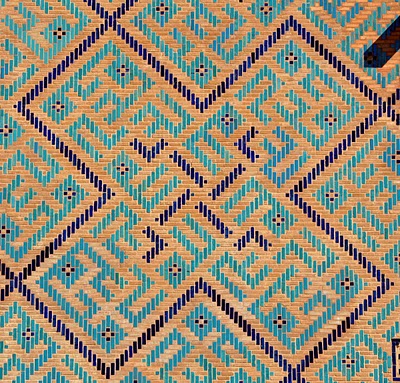 A local guide explained that when viewed from the side, the structure itself is shaped like the Arabic writing of the name “Allah”: ﷲ 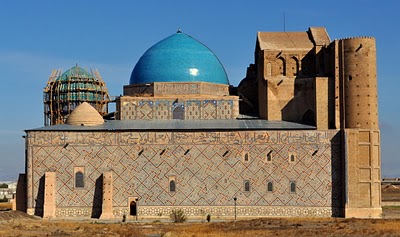 Surrounding the mausoleum were the remains of the old town. One interesting structure was an underground mosque, built no doubt to shield worshippers from the hot summer and cold winter weather.

After a few hours, we returned to Shymkent and caught an overnight train to Almaty, the largest city of Kazakhstan.