You have no doubt noticed we haven’t posted anything for a long time. We haven’t been idle. In fact, we’ve been studying Chinese like mad to make the most of our time in Kunming. We’ve made a lot of progress working one-on-one with excellent teachers, and in fact, we’ve decided to stay a few months longer than originally planned. Before we leave in mid-April, we will post some thoughts about learning languages, but there will be no pictures and probably not much to interest armchair travelers.

But we do have pictures and stories from a few weekend trips to western Yunnan province and nearby Laos. I will post these very soon. 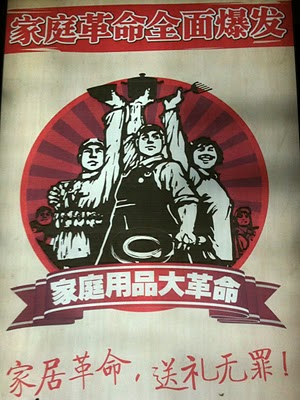 In the meantime, here is a picture to show how much China has changed in the last thirty years. This advertisement on the side of an upscale department store takes direct aim at the artwork of the Communist era. The red slogans proclaim “The great household revolution has broken out!” and “No guilt in giving presents!”

Some newly elected US congressmen would probably have us thrown us in jail if we made similar jokes about George Washington.