Now it is time to leave Kashgar and return to the mountains of Central Asia.

At 5:00 Monday morning, our driver will pick us up and take us to the Kyrgyzstan border, where another driver is supposed to be waiting. We will spend one night in the Kyrgyz mountain crossroads of Sary Tash, then cross the Tajik border and proceed along the Pamir Highway to Murghab.

Once there, we will spend a few days exploring the high Pamirs and then drive down the Tajik side of the Wakhan Valley, along but not over the border to Afghanistan. We will then reach the larger town of Khorog and either drive or fly to Dushanbe, the capital of Tajikistan.

All this will take one and a half to two weeks, and blog postings may be few or nonexistent during that time. See you on the other end!

Ah, Kashgar. The great oasis city on the edge of the formidable Taklamakan Desert. The meeting point of the northern and southern silk roads. The remote listening post of Russian and English consulates staring down the road at each other and playing the Great Game for control of Asia a century ago.

I have my own history with Kashgar. During my first trip to China in 1987, I became one of the first western travelers in 50 years to visit Kashgar and the Karakoram Highway to Pakistan when I found myself unable to enter Tibet, which had been closed by unrest. At the time, China was still a black-and-white movie of worker's coats and grimy streets. When I stepped into the colorful bazaars of Kashgar, it was as if I had landed in Oz. There were no paved streets or cars. Donkey carts padded along beside water channels lining every street. The huge Mao statue stood on the edge of town ignored by the local population. 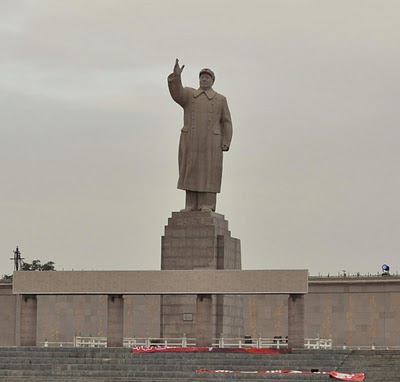 Some cities are bounded by time as well as space. The Kashgar I had known was gone – still there in another time but gone from the present, replaced by a gritty, bustling Chinese city with cars, wide streets and underground shopping malls. The water that used to run alongside the streets now goes into pipes.

In the intervening 23 years, China's “Develop the West” program has paid millions of people to move to Xinjiang, the “new border” in an attempt to overwhelm and subdue the native Uighur population. Billions of dollars have gone into trains, paved streets and urban reconstruction, which in China means knocking down whatever was there and replacing it with drab apartments and an occasional concrete reproduction to entertain tour groups. 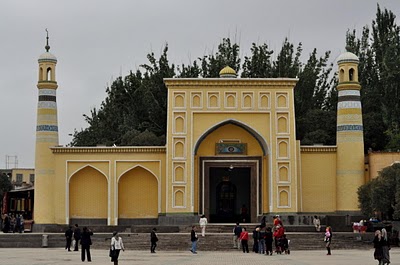 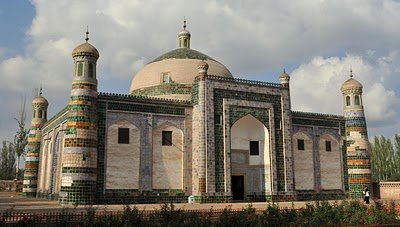 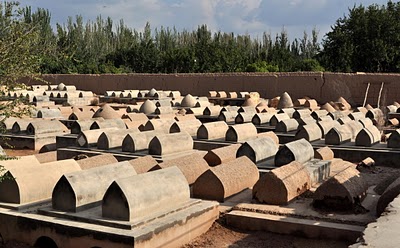 Of course not everything has changed. The 600-year-old Id Kah Mosque still stands in the center of town, and the Abakh Hoja Tomb and above-ground graveyard in its outskirts. Parts of the old town still remain, though falling into disrepair as the wrecking balls move closer. Storefronts and sidewalks are still crowded with vendors and repairmen, like the cobbler who restitched Marcia's boot for 1 yuan (15 cents in US currency). Uighur men and women still walk the streets in their hats, scarves and the occasional veil. Children still want their pictures taken. And everyone still ignores the Mao statue. 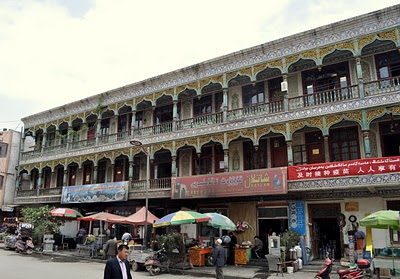 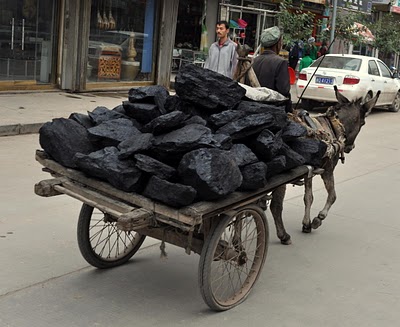 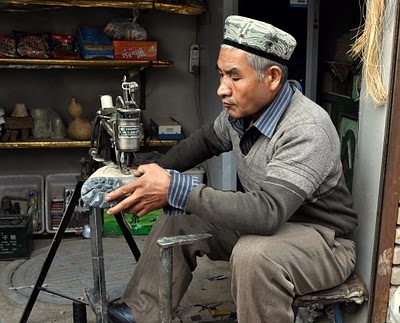 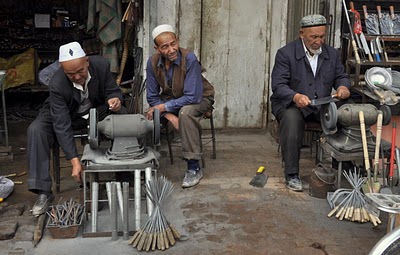 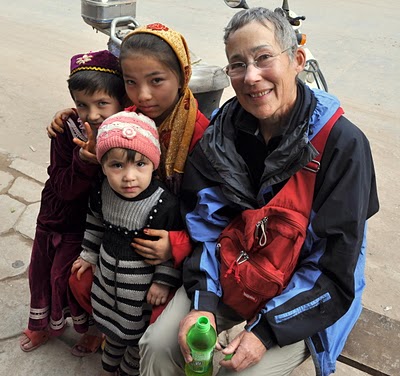 I met John Hu again. In 1987 he was just starting his cafe in a town where westerners attracted a crowd of 50 staring locals. He learned to cook pizza by asking travelers how to do it. This was a born entrepreneur and I knew he would go far. He now owns a chain of four cafes and tourist outfitters across Xinjiang and has just opened one in Lhasa.

And Kashgar still has its Sunday Market, bigger than ever. It is so big, in fact, that they have split it in two, moving the animal market six kilometers out of town, where the fat-tailed sheep and horses can be displayed in a suitably muddy environment. Donkey and horse carts are still common there, and people wanting to buy a horse can take it for a test drive around the mayhem. It’s the Tsukiji of Central Asia. 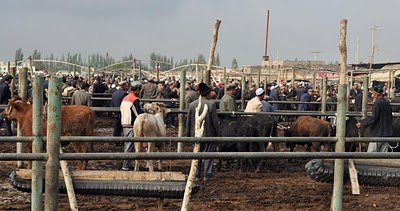 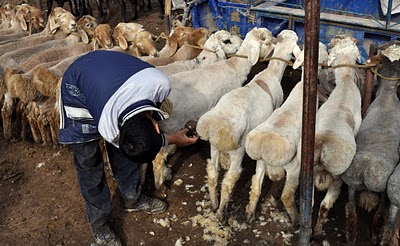 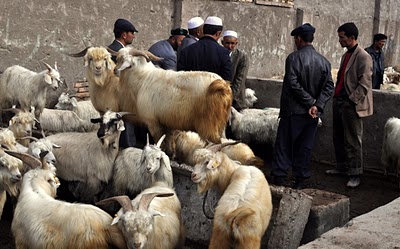 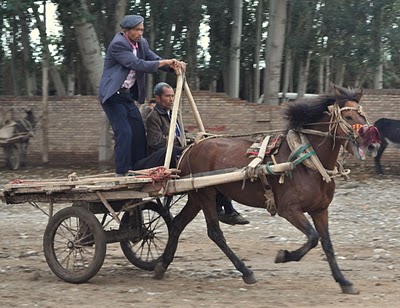 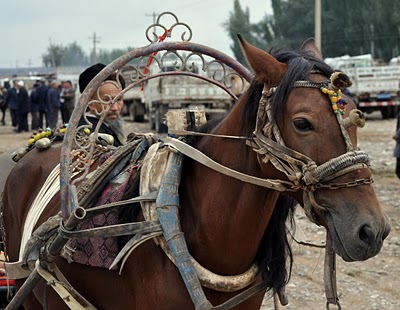 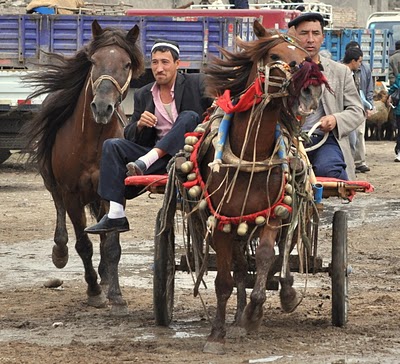 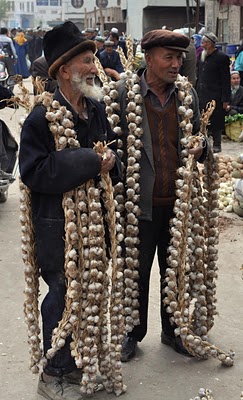 The regular Kashgar Sunday Market is the world’s largest flea market. All manner of clothes, rugs, hardware, and daily appliances are on display in almost a square kilometer of covered market, and the wares spread out into the surrounding streets. We were, however, somewhat disappointed at the selection of food, which we needed to buy for our time in Tajikistan, where supplies are reportedly limited. Food was limited to the staples of the local Uighur population and not much of it will travel well. We finally shopped at a grocery store in town. 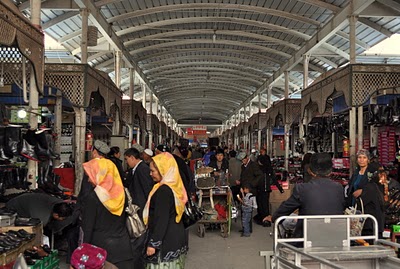 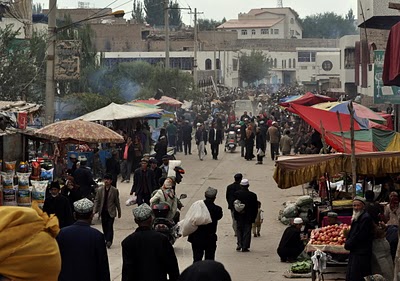 So in a way I have now visited two cities called Kashgar. A different city in the same space but a different time. Who am I to say that the old mud houses were better for living than the new apartment blocks? Running water and sanitation are a good thing, and taxis are more comfortable than donkey carts. Time has been moving on for thousands of years here and it will again.

Chinese signs are often interesting, both for their content and their use of English.

The Chinese are obviously sensitive to the accusation that they are oppressing the local Uighur population, so they put the following heavy-handed propaganda at the end of an introduction to Kashgar’s mosque.

More amusing is the following sign on the back of the “tourist” urinals outside the mosque. I think the English is supposed to suggest that clients should stand close to avoid peeing on the floor. I can’t read the Uighur, but the Chinese is even more uplifting and reminiscent of Neil Armstrong’s first words on the moon. A slightly liberal translation would be “A small step forward to the urinal, a giant leap for mankind!”

With five days to spare before we could cross back into Kyrgyzstan and Tajikistan, we decided to take a road trip to three smaller towns to the southeast of Kashgar. Yarkand, Yengisar and Karghilik (Yingjisha, Shache and Yecheng in Chinese) lie on the edge of the Taklamakan Desert a few hours bus ride from Kashgar, and life is still more traditional there. The train and superhighway won't reach here until next year.

For most of this time it was raining. The Taklamakan Desert is one of the driest places on earth, ranking with the Sahara as one of the only “true” deserts. But here it was raining, a monsoonal storm coming over the mountains from Ladakh and India. Dirt streets turned to mud and dry watercourses were close to overflowing. 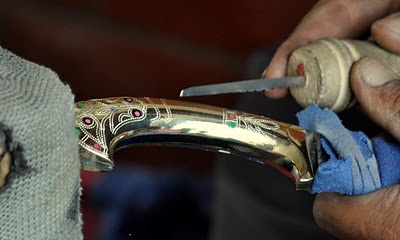 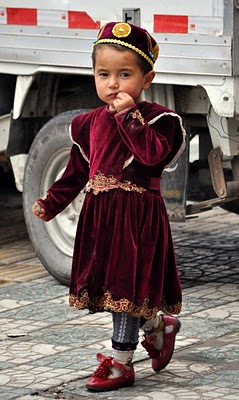 We visited Yengisar first. Yengisar is known for its cottage industry of making the ornamental knives that every Uighur carries. Although some are now mass-produced, a few are still made by craftsman in small teams with few tools beyond a hand drill and grinder. The master of each team adds the decorative marks.

We then visited the smaller town of Karghilik. Again, the main part of town is a modern Chinese construction, but the mosque and mud-brick old town remains intact. Mud was flowing freely in the streets after the recent rain. 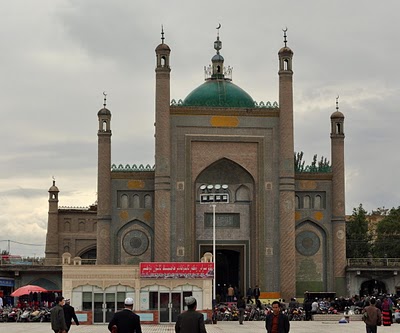 Finally, we visited Yarkand. Considerably larger, Yarkand was the northern end of the historical road over the Karakoram to Leh in Ladakh. That road is now closed and with it the trade with India. Although Yarkand has been considerably expanded by Chinese immigration, its old town is still thriving, with donkey carts mixing with electric vans. The mosque and former palace sit beside the tomb of Ammanisahan, a queen and composer of the classic Uighur musical collection. A group watched a street performer. A group of men prepared to send the casket of a loved one to the next world. 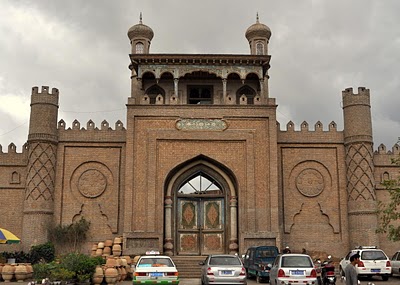 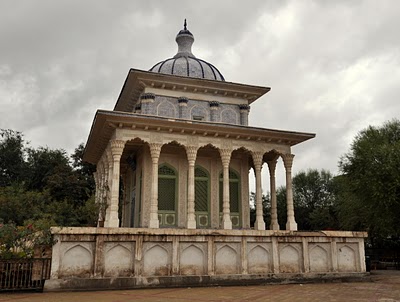 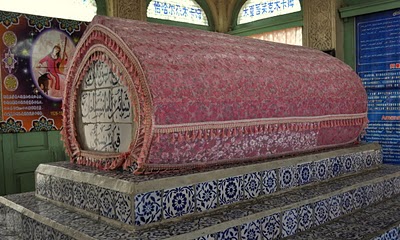 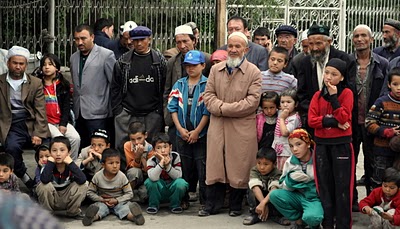 It is harder to find Chinese speakers in these smaller towns. In Kashgar, we could use our basic Chinese to order food and get around, but most of the locals here spoke only Uighur.

The most surprising place, however, was the Yarkand wangba (internet cafe). There is a large and rather rundown shopping arcade in the Chinese section near the bus station. On the mostly abandoned second floor are three huge rooms with a hundred computers each, open 24 hours a day mostly for teenagers playing games. 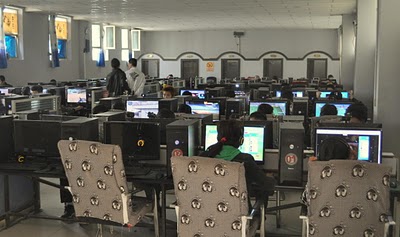 After cleaning up and getting a good night's sleep in Karakol, we immediately needed to move on to our next destinations, the Torugart Pass and Kashgar, China. We would then cross back over another pass to the last mountain valley on the Kyrgyzstan-Tajikistan border. This roundabout route would get us to the Pamir mountains of Tajikistan without going through the troubled southern Kyrgyz cities of Osh and Jalalabad.

The Torugart Pass is legendary among Central Asian travelers, mostly because it can be very tricky to get across. Chinese bureaucracy says that the pass is only for local traffic, but they allow foreigners through provided they have prearranged transport on both sides of the pass. And the pass is closed on weekends and Chinese holidays, of which there are many in this season. So if we didn't get across on Tuesday the 21st, it would be almost a week before we would get another chance.

We spent most of Monday the 20th waiting for our Kyrgyzstan visa extensions. Without an extension, our one-month visas would expire on September 28. If all goes well, we will enter Tajikistan on that day, but it is unwise to assume all will go well in this part of the world. And it is even more unwise to overstay a visa, giving the corrupt police a reason to harass and demand bribes. So we applied and what should have been a ten-minute operation took most of the working day.

We finally got on the road at 4pm for the five-hour drive to Naryn, an overnight waypoint in the very center of Kyrgyzstan. Our route took us along the south short of Lake Issyk-Kol, the huge mountain lake that we had driven by on the way to Karakol. In addition to the lake, we passed many fine mountains and elaborate Kyrgyz cemeteries. The weather was superb this time, but it unfortunately got dark for the last mountainous stretch into Naryn. 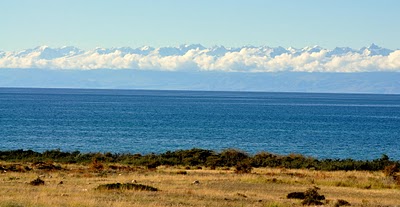 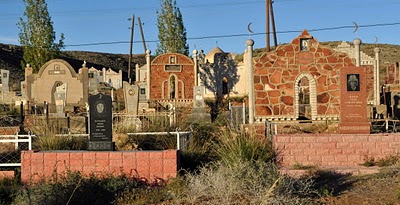 We rose at 6 the next morning to drive to the pass. This part of Kyrgyzstan is high-desert basin-and-range country with broad valleys not unlike Nevada's. We passed but did not have time to visit the 15th-century caravansarai of Tash Rabat. 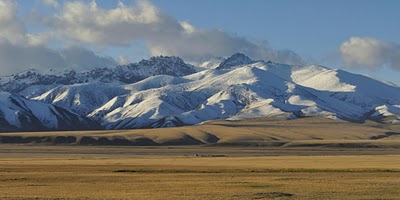 Kyrgyz exit formalities were straightforward, but the meeting at the pass was not. Neither Kyrgyz nor Chinese cars can cross the border, so both cars come to the pass and the foreigners walk across with their bags.

That's assuming both cars arrive. It was snowing and about 50 trucks were trying to cross the one-lane pass in both directions. The resulting gridlock shut down all movement for several hours. Our Chinese driver was stuck in the snow downhill. 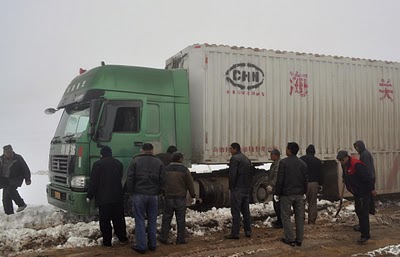 I finally managed to call the Chinese driver on my cell phone and learned that he was ten minutes away. Once he arrived, we went immediately downhill towards Kashgar.

The Chinese border police chose my backpack to search. They gave me some trouble about my large collection of medicines, but ultimately had fun joking with me about the elementary Chinese books they found.

By the early evening we were in Kashgar.