We made it back to San Francisco on schedule on July 12, and we’ve been very busy since then with all the tasks of returning home and preparing for our next round of adventures. In the space of about ten days, we visited friends and family, played with grandchildren, saw the dentist, bought and organized medicines, and sorted a pile of mail over one meter high. We are now at our summer house in Canada resting and working through a series of other tasks.

One of those is of course to post blogs from six weeks of traveling and trekking in India. You have already seen a few June postings from our first few days collecting visas in Delhi, and I’ve now added one about Jaipur, which we visited around the same time.

Next, now filed under their proper times in June and July, I have added a long series of postings and pictures from Ladakh, which I hope will make up for our long silence.

I have now also rearranged the Nepal trek postings to their proper time sequence in May 2010. Please use the navigation panel at the right or repeatedly click the “Older Posts” link at the bottom of the page if you want to get back to them.

After ten days in Leh and surrounding areas, we were ready to get back on the trail. We would now spend a full month doing several of the most celebrated treks in the Indian Himalaya.

Although I have structured the entries as if they were a single long trek, it was really three routes back-to-back. In between, we hit roads, electricity, and in one case a monastic festival.

The first route from days 1 to 11 went through the Markha Valley, the most popular trekking region in Ladakh. Crossing a high pass on either end from the Indus river, this route took us up a long, secluded valley just to the south of Leh. This segment ended at the monastery of Hemis, and we timed our trip to attend its annual two-day monk dancing festival. We then returned to Leh for one night of hot showers and repacking.

On days 12 through 29, we covered the second and third segments, which are together known as the Zanskar trek. This was a long route that crosses many high passes and ends on the south side of the Great Himalaya Range. We were unable to complete the second segment as planned because our donkey men were unwilling to take their animals over the highest pass, but fortunately we were able rejoin te third part of our route on schedule by driving to the Zanskar valley, an isolated mountain region of monasteries and towns that time forgot.

Time will not be forgetting these regions much longer. In an attempt to gain more control and access to this sensitive border area, the Indian army is building new roads along many of these stretches. This will arguably help the locals by improving access to the Zanskar and Indus valleys – at present Zanskar is only reachable from Leh by a two-day road trip for a few months each summer and by one of the world's coldest treks up a frozen river in the middle of winter. But it means that within a few years, these pictures of splendid isolation will become history.

I have structured the daily blog entries so they appear in order. To see the whole sequence, you will need to pick the “Older Posts” links at the bottom or the navigation links to the right.

We started our trek from a trailhead called Zingchen just across the valley from Leh. Many travelers still start from Spituk on the Indus river, but that is now unnecessary as there is a new dirt road up the valley, avoiding one day of dusty walking.

We did make our taxi stop at Spituk monastery along the way. Like other Ladakhi monasteries, Spituk has a separate room devoted to protectors, and numerous pilgrims were imploring their aid. Built on a hill, Spituk also overlooks Leh's civilian-military airport. Its 10,000 foot runway is longer than that of many major airports in the US. 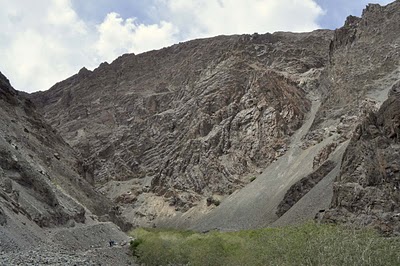 The trail from Zingchen climbed gradually up a canyon with many layers of colorful rock. After a few hours, the valley widened at a settlement called Rumbak, where we had tea in a “parachute tent.” The Indian military used cloth parachutes for cargo drops only once, and locals could then convert them into large teepees.

We continued to climb until we reached the base of our first pass. Although gradual, our first day's climb had been almost 1000 meters and we were glad to rest for the night.

Paying extra for a well-established expedition operator bought us five-star camp treatment. The Nepali-trained cook made great food, the best of all our treks. Our tent was roomy enough for four, so we could easily store all our bags inside. I kept reminding Marcia not to get spoiled, because it won't be this way in Kyrgyzstan.

We awoke to the sound of our staff brushing snow off our tent. Our camp at 4400 meters was above the snow line and 5 centimeters (2 inches) had fallen overnight. We had breakfast and got a late start. 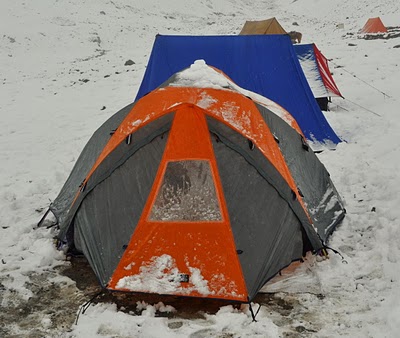 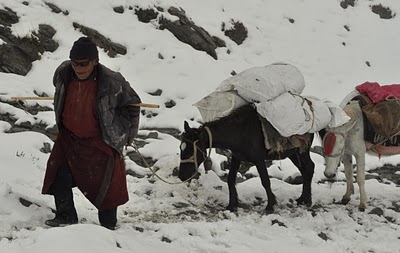 It continued to snow on and off as we climbed to the 5000 meter Ganda La pass over the Stok Range. Marcia and I considered ourselves acclimatized after ten days in Leh, but we were still out of breath. Even the horses seemed unhappy about climbing in the snow. But finally we all made it and dropped down the muddy trail on the other side.

We kept the day short by camping halfway down the valley. The snow stopped shortly after we arrived in camp.

We planned this as a short day to drop the rest of the way to the Markha valley, where we would spend the next four days.

We met the valley at a village called Skiu, a collection of a few houses and farms spread out along the Markha river. A small monastery overlooked the village. Its modern part was like most others, but a small door led to an ancient room with a statue of Maitreiya (Buddha of the Future). This statue stood 6 meters (20 feet) tall and was of great antiquity.

The weather was better than the previous day but we still had a few drops of rain as we neared our campsite. Ladakh is normally a desert and June is one of its driest months, but this year the pattern seems to be different, with small showers passing across the mountains even on days that start sunny. Everyone blames global warming. 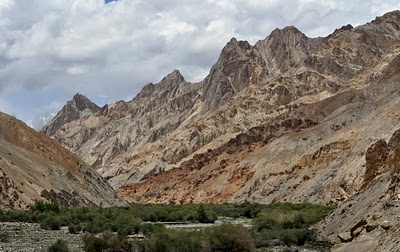 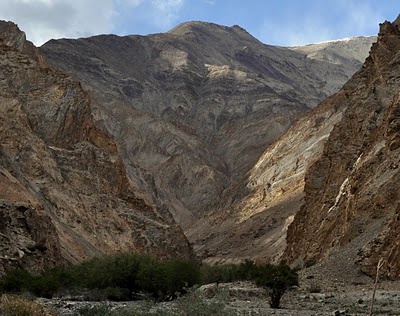 The Markha Valley was narrower than the Indus and much more varied. The hills on each side were a constantly changing scene of rugged spires and eroded slopes. The valley floor had sparse stands of buckthorn and other desert plants, with irrigated fields near human habitations. 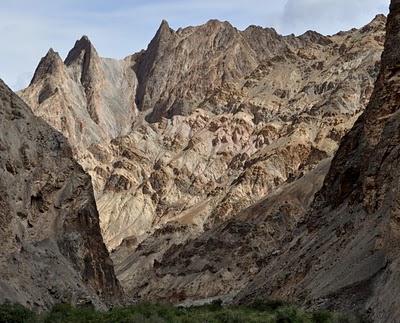 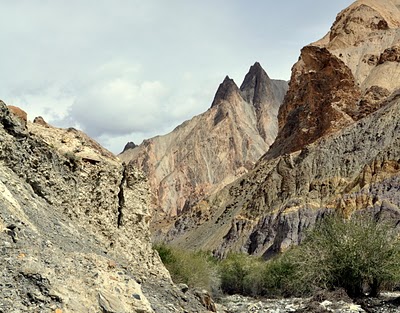 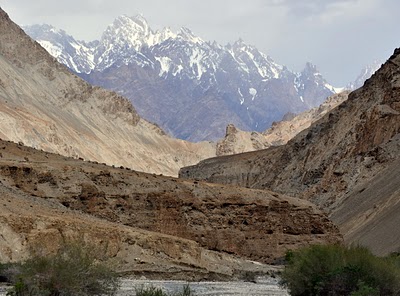 The hiking was long but mostly flat. At one place we needed to ford the cold stream, but the water was relatively low and no problem. 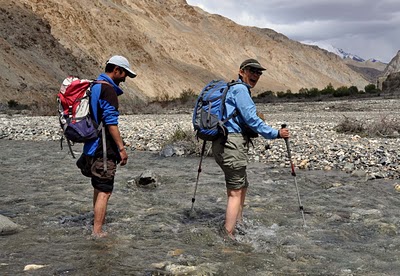 We camped at Markha, the most sizeable village in the valley. There was a small monastery and the ruins of a hilltop fort that had been built during the 1830 Kashmiri invasion. The fifteen houses seemed mostly empty, with people off working fields elsewhere in the valley.

The valley above Markha became increasingly spectacular. A knife-edge spire was visible from the town, and more overlooked each side valley. In the afternoon, the valley widened enough to give views of Kang Yatze, the 6400-meter peak overlooking the pass we will need to cross. 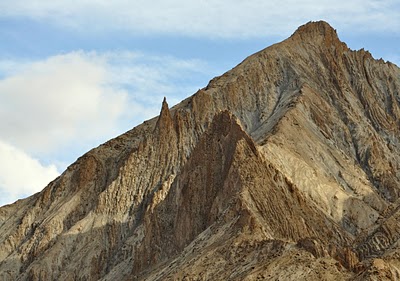 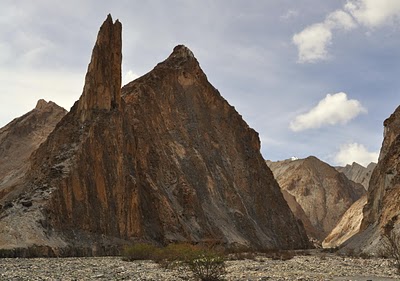 About two hours above Markha, we took a side trip up a hill to another small monastery. Like others in the valley, this belonged to the Drukpa sect based in Bhutan. It was staffed by a single aging monk sent over the pass from Hemis monastery. The locals were building a house fort the monk at the base of the hill so he would not have to make the 50-meter climb so frequently. 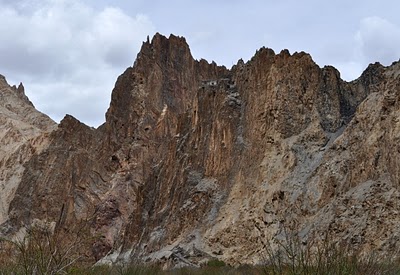 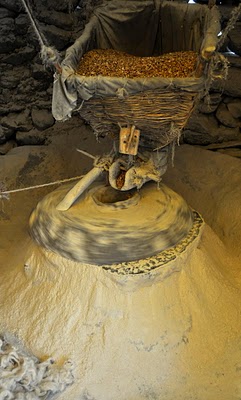 Near our campsite was a water-driven barley mill. The age-old device was fully automatic, with a small arm letting through a few grains at a time from a hopper onto the millstone. The ground flour fell in a mound around the turning stone. This seemed far more advanced than similar mills we had seen in Nepal, which had to be attended.

It rained and snowed during the night, but cleared a bit in the morning. We seemed to be stuck in an early-spring weather pattern with passing showers and patches of sun. It has rained or snowed a bit every day we have been in the valley, but usually just for short periods. 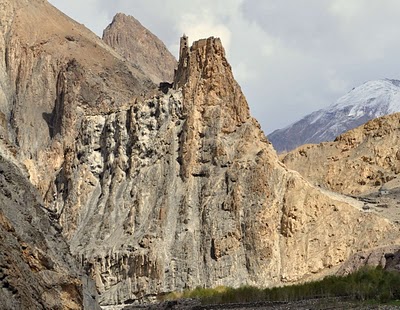 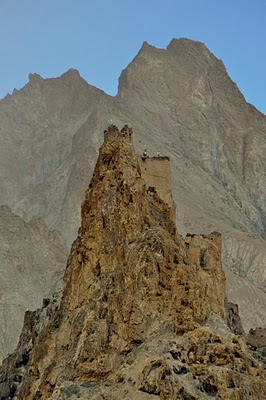 Hangkar, the village where we had camped, had the ruins of another hilltop fort. Above town, the river split into two streams and we followed the left branch uphill. Before long, we began climbing more steeply up a dry slope, eventually reaching a high plateau with a shepherd's grazing ground called Nimaling. Marcia was still short of breath from the 4800-meter (16,000 foot) altitude, but we had no real problems with the climb.

We had planned a rest day into the trip at the high-altitude valley of Nimaling. It wasn't really necessary as the hiking had been easy, but we had time and the books recommended side trips in good weather.

The weather didn't look so good as the day began. We had a little snow overnight and the flurries continued over breakfast. In light of this, Marcia decided to hang out in the tent while I made the possibly futile climb to a viewpoint. I was glad I did.

The side trip climbed the shoulder of Kang Yatze, the largest mountain in the area. The main 6400-meter (21,000 foot) summit is a difficult technical climb, but given enough time and a little equipment, even non-mountaineers can climb the 6200-meter (20,500 foot) lower summit, Kang Yatze II. Lacking both, I decided merely to climb 500 meters up a moraine in front of the mountain. 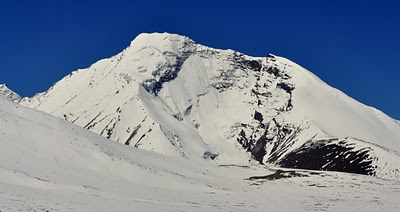 Even from there the views were magnificent, because the weather had cleared as I was climbing. I could look all the way up the Markha valley where we had walked, and I could see beyond to a pass over the Zanskar mountains. The second part of our trek will pass along the back side of these mountains. 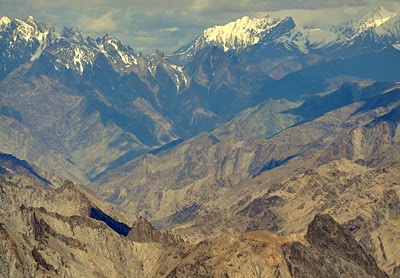 I was back in camp for a late lunch, and we spent the afternoon reading books. Even on hiking days, we usually arrive early in camp to do a lot of reading.

We also took a short walk up the valley in the sunshine, which had now become widespread. The weather had finally changed for the better.

The weather was still nice for the crossing of the highest pass on our trip. From the south, the 5260-meter (17,500 foot) Konmaru La was an easy climb over a saddle that had been clearly visible from my viewpoint of the previous day. 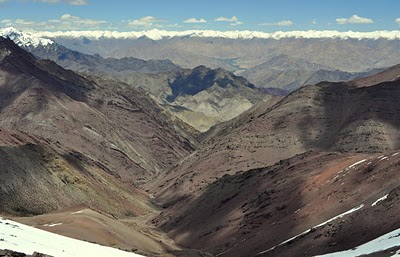 The view from the top was similar to the one I had seen the previous day, but it now included the 7100-meter Kun and Nun peaks to the south and the 7600-meter peaks of the Eastern Karakoram to the far north. I actually got to climb the pass twice because I discovered shortly after beginning the descent that I had misconfigured my camera. So I had to go back up and reshoot all of my photos.

The descent down the north side was much more difficult. There was a fair amount of snow in places near the top, so we had to take an even steeper route than normal. Then halfway down, the trail entered a beautiful but rugged gorge where the well-built trail had been washed out in many places two years before. The temporary alternate route went up and down and frequently used the stream bed as its only way through. 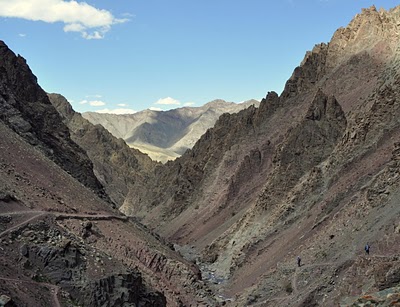 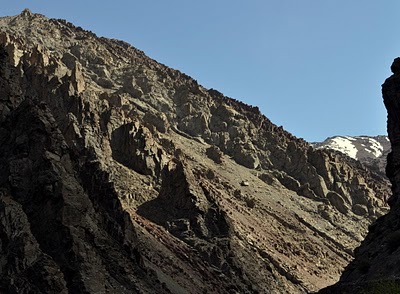 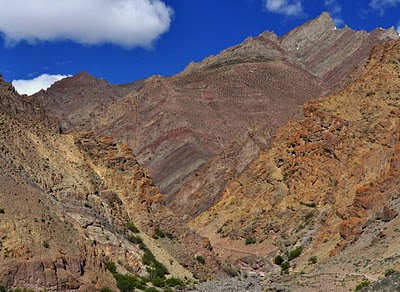