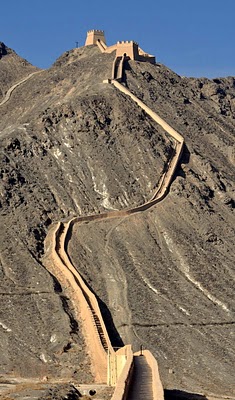 Our next stop was Jiayuguan, the town that marked the western edge of China for most of the last millennium. Although Chinese influence stretched to Dunhuang and further at times, the Ming Dynasty ended its Great Wall here in the 14th century. Anything beyond was the realm of bandits and barbarians.

The Great Wall was a big draw for Jiayuguan. One section had been nicely restored and gave a chance to walk along the ramparts without the hordes of people that visit near Beijing. This section is called the “overhanging wall” because it is so steep it seems to overhang the mountains. A few kilometers further, the wall ends at a cliff overlooking a river. Guard towers periodically straddled the wall for surveillance and communication. 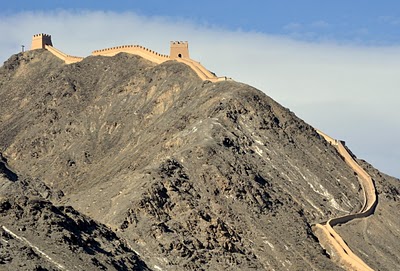 Within this last section lies the Jiayuguan fort and its gate through the wall. Although much of it was built or rebuilt in the last few centuries, it gave a good sense for the ends to which the Ming rulers defended the gateway to their kingdom. Three sets of walls and guard towers defended the arch that allowed traders to enter and unwanted criminals to be cast out into the desert. 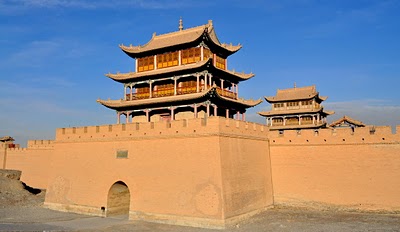 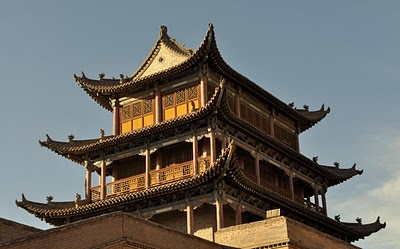 An older and more interesting site lies about 20 kilometers to the east. Here was the burial ground for the local kings of the Wei and Western Jin periods (3rd to 5th century CE). These tombs were deep underground and their walls were covered with painted tiles. Although these showed none of the sophistication that was found in Dunhuang a few centuries later, their commonplace subjects gave an interesting view into the everyday life of the period. 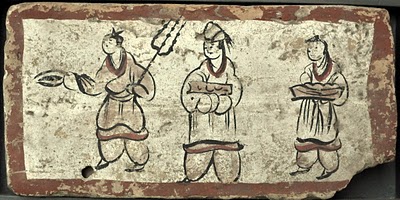