I have dreamed of visiting Dunhuang for most of my life.

Dunhuang is the site of the Mogao Caves, which contain the world’s greatest collection of ancient Buddhist art. Dating back to the Sui and Tang Dynasties (6th to 9th centuries), many of these caves were painted at the high point of Chinese art.

Western explorers learned of them in the late nineteenth century and quickly carted off a huge stash of ancient manuscripts that included the world’s oldest printed book, made seven centuries before Gutenburg. Fortunately for China, the caves were still attached to a working monastery and few of the paintings were taken. Zhou Enlai also protected the caves during the Cultural Revolution, so they suffered little damage from the Red Guards. 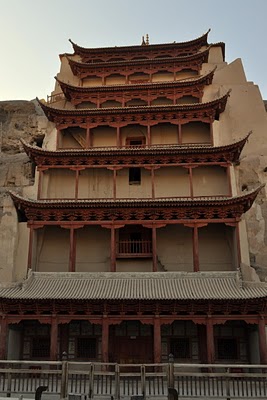 Photographs are allowed only of the outside of the caves. Most of the exteriors are bare concrete conservation doors installed by the Chinese government a few decades ago, but a few retain their wooden gates dating back to the Tang Dynasty. The one at the right shelters a 33-meter (110-foot) high Buddha, the third largest in the world. 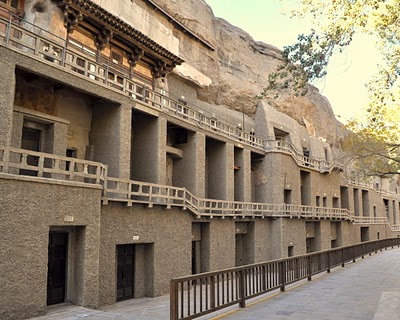 The International Dunhuang Project is building an online database of the Dunhuang art that has ended up in museums around the world. But to really experience these remarkable works, you will will have to make your own trip into the desert.

Dunhuang is also the home of some of the world’s largest sand dunes. These 300-meter (1000 foot) high mountains have been turned into an overpriced amusment park for rich Chinese tourists, but their natural beauty remains.

We hired a car for a day trip into the desert west of Dunhuang. There lay the ruins of the Jade Gate, which marked the edge of China during the Han Dynasty 2000 years ago. Beyond it lay only desert.

In the same area can be found the remains of the Han-period Great Wall. Although it was less dramatic than the later Ming Dynasty wall featured on tourist posters, the Han wall actually extended further west into the desert. And unlike the tourist wall, it is 2000 years old and has never been restored.