About two hours southeast of Urumqi lies the Turpan Depression, the second lowest spot on earth. About 150 meters (500 feet) below sea level, Turpan regularly measures the hottest temperatures in China. But it was comfortably cool in the late autumn.

Turpan is the site of several ancient cities. We first visited Jiaohe, a Chinese garrison town from the Han through Tang dynasties (1st through 9th centuries). It was built on a natural tableland between two river canyons, and extensive ruins remain of the town and its Buddhist monasteries.

We also visited Gaochang, also called Kharakhoja and Khocho. This was even larger, stretching several kilometers in each direction. The best-preserved section was the Buddhist monastery with its central pillar. Other walls gave a sense of the huge city it must have been at its peak during the Tang dynasty (7th to 9th centuries). The nearby Astana caves are now empty except for a few paintings and mummies, but they were the site of many important archaeological finds. 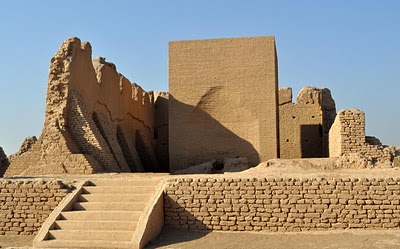 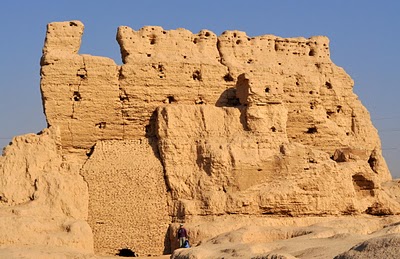 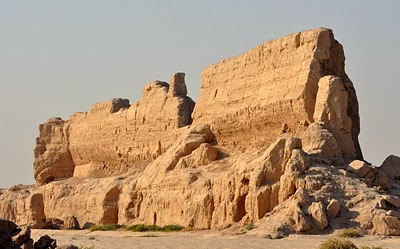 Another famous site was the Bezeklik Caves, whose frescos were mostly stripped by the German archaeologist Albert von le Coq. Many of those paintings were destroyed by bombing raids in World War II, but enough was left for us to see what they must have been like. 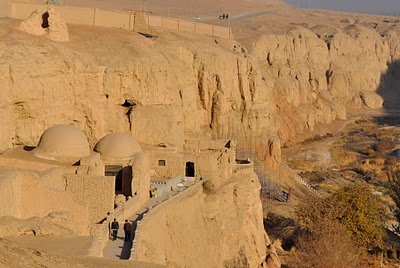 Turpan is not all ancient cities and caves. The town itself is pleasant with vine-covered streets and a huge market. Outlying villages such as Tuyoq have pilgrimage sites that keep some Uighur culture alive. 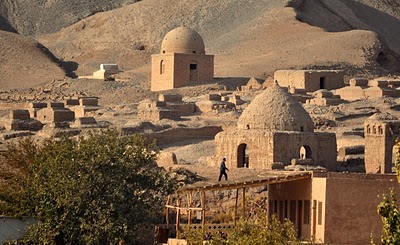 And although they are now featured as a AAAA tourist attraction, the underground aqueducts that feed the town are a remarkable engineering feat built as long ago as 2000 years. Using only hand tools, the local population dug over 5000 kilometers of these channels to tap the Tianshan’s mountain snows without losing water to evaporation. 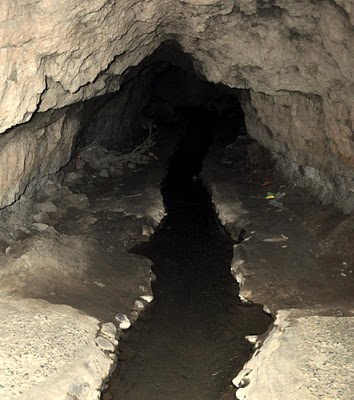 The only downside to Turpan was the difficulty of getting to our next destination, Dunhuang. Neither town has a train station right in town, so we would have had to take buses around 100 kilometers on each end. And the only night train would have arrived at 5am, which didn’t sound like fun.

So we talked ourselves into spending a night on a sleeper bus. At first it wasn’t bad and I got a few hours of sleep. But at a bathroom stop a little after midnight, I was hit with diarrhea, and I spent the rest of the night taking antibiotics and trying to keep from getting sick as the bus rocked over an increasingly bad road. I was very happy when we got to Dunhuang at 10am.