Once the capital of a desert kingdom, Kuche is now a booming oil town. Our hotel had a glossy book published by the local boosters to convince Han Chinese people to move west.

We began by visiting the old town and its Friday bazaar. The indigenous Uighur population mostly lives and shops here, and the old town has been spared the changes that have gutted the larger cities. Since the Han Chinese built their new city center to the east, there has been no pressure to knock down the old town and its city wall. Storefronts are still brightly painted wood buildings. The bazaar was teeming with people and sheep. 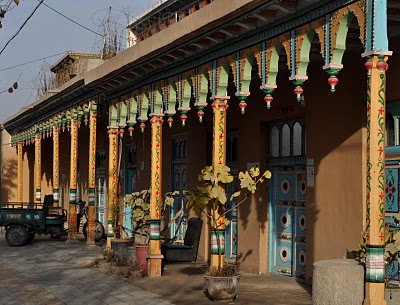 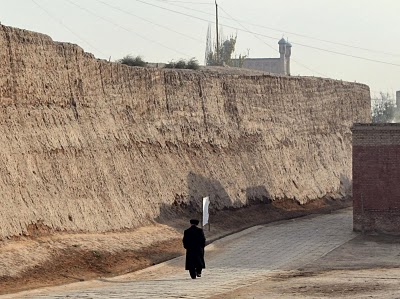 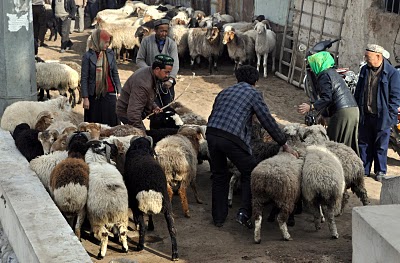 In the afternoon, we hired a car to drive 70 kilometers (45 miles) to the Kizil Thousand Buddha Caves. Our expectations were low because these were the site of an early race between German, Russian, and English explorers to remove ancient paintings for display in their respective capitals’ museums. More recently, local Muslims and Red Guards took their turns scratching out bits. As a result of this cultural theft and vandalism, many of the caves were empty or damaged.

But even what remained was fascinating. The Kizil cave paintings date from the 4th to 7th centuries CE, and they are among the earliest Buddhist art in China. The iconography still shows influences of the earlier Buddhist centers in Gandhara and Central Asia, from which the religion spread across the Silk Road. Interior pictures were not allowed, but can be found on the internet at sites such as this. 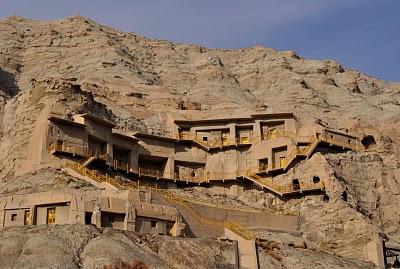 On the way to and from the caves, we passed through some remarkable desert mountains. 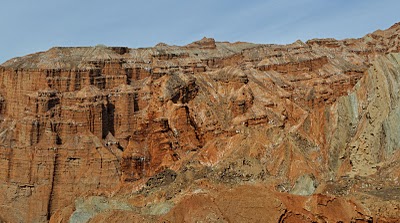 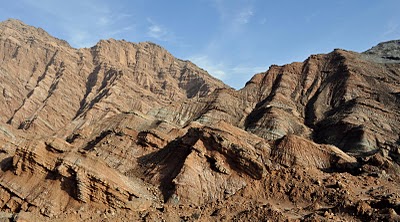 On the way back, we made a detour to the ruins of Subashi, which was a Buddhist city and temple from the 4th to 14th centuries. Some walls and stupas remain. 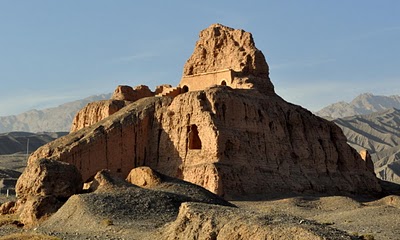 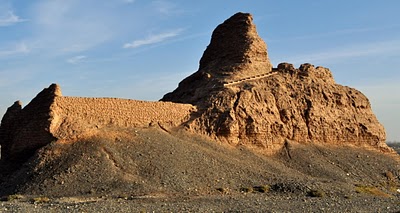 We came back to the train station and took an overnight sleeper back to Urumqi, where we had left our bags a week earlier. Using double-decker cars with two bunks on each level, the new “hard sleepers” fit over 80 beds into a single train car. We slept well in our capsule hotel.