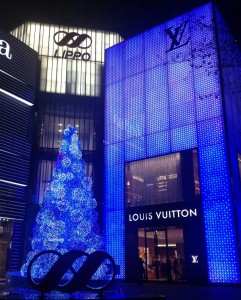 December 25, 2012 was Tom’s and my third consecutive Christmas in China. Tom is working on a project for the Shanghai branch of a European pharmaceutical company. The company’s Shanghai office, along with the offices of many Western companies, was closed on Christmas Day. But for most people this year’s Christmas Day, falling on a Tuesday, was an ordinary work day.

That said, people everywhere love holidays and businesses everywhere love occasions to inspire people to shop. Especially in places like Shanghai where foreigners and their various holidays are quite visible, Chinese have adopted their own version of celebrating foreign holidays – St. Patrick’s Day, Valentine’s Day, Bastille Day, Halloween, Christmas – Cinco de Mayo and June ‘Teenth have yet to catch on. My Mandarin teacher says that any holiday is a good excuse to get together with family or friends to dine around a large round table, play cards or majiang, and sing karaoke. Most often such groups are extended family, classmates from as far back as elementary school, or work colleagues – but rarely casual friends.

For or Christmas dinner we dined at Quanjude, not just any old restaurant, but a branch of a famous Beijing restaurant specializing in Peking Duck. Extended families gathered around the adjacent tables probably pitied the two foreigners dining practically alone.

From the balcony of our 29th floor apartment, we look down into the courtyard of the historic Pure Heart Church. A few days before Christmas all the courtyard’s trees were festooned with tiny colored lights. I decided to observe Christmas Eve by joining a huge throng of people attending the Monday evening service.

The large sanctuary was packed standing-room-only. Two large meeting halls open off the courtyard. Both were packed with people watching the service by video feed. The crowd even overflowed into the courtyard. After the minister finished his sermon, the large choir performed several pieces ending with the Hallelujah Chorus sung in Handel’s English. Everyone stood. The service ended with the congregation singing Joy to the World in Chinese. I sang too – in English.

I’ve been surprised that many of the Chinese people I’ve met since living in Shanghai are practicing Christians. Before “liberation,” Christian missionaries, both Western and home-grown Chinese, worked extensively in China since the mid-1800s. Even though the percentage of Christians is low relative to China’s population, the actual number is quite large.

The BIG holiday is Chinese New Year, known here as Spring Festival. Schools will close for a month. Businesses, government offices and many construction sites and manufacturing plants will close for at least a week. All over China, people will jam every form of transportation as they return to their hometowns to spend Spring Festival with their extended families.