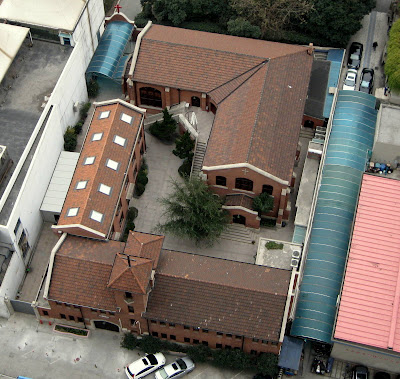 From our 30th floor balcony, we look straight down into the courtyard of the Pure Heart Church (from Matthew 5:8, “Blessed are the pure in heart, for they shall see God”. During Easter week and Easter Sunday, the church was even more active than usual. So I was inspired to tell you what I’ve learned about the Pure Heart Church. 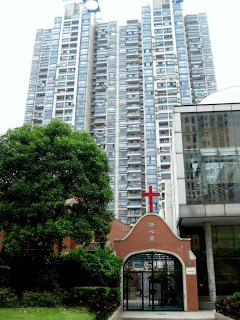 The church was founded in 1860 by four missionaries sent to China by the Presbyterian Church of the United States. It was initially known as The First Presbyterian Church of Shanghai.  The founders included John Marshall Willoughby Farnham (b. Lebanon, Maine, 1829. d. Shanghai, 1917) and his wife Mary Jane Scott Farnham (d. 1913), and a man surnamed Lowrey.

Besides compiling one the first Chinese-dialect hymnals and publishing religious tracts, John and Mary Jane developed a successful educational program and introduced radical changes in educational methods. “Instead of rote memory the Farnhams emphasized reason and logic. Even more revolutionary was the merger of the boys’ and girls’ schools. The girls cooked for the boys as well as for themselves.” (G. Thompson Brown, Earthen Vessels and Transcendent Power, p. 49) Mary Farnham Girls’ School and the Lowrie Institute, a boys’ school where John was principal for 24 years, later became the most prestigious mission schools in Shanghai.


Since 1882 all of the church’s pastors have been Chinese. In 1919 the congregation purchased property where the current church is located. The current church building was completed in 1923. Beginning in August 1958, the Shanghai Christian Self-Patriotic Committee, combined the all the Protestant congregations in Shanghai’s Southern District with the Pure Heart Church congregation.

With the start of the Cultural Revolution in autumn 1966, church activities were suspended. In 1979 Pure Heart Church was the second church in Shanghai to reopen. “Shanghai Christian Three-Self Patriotic Committee” appointed its pastors. A photo in the church’s English language brochure shows Rev. Billie Graham preaching to a standing-room-only crowd.


When the rest of the city block was knocked down and replaced with the 2002-vintage residential complex where we live, the church building’s designation as “an important historical structure”, saved it from the wrecking ball. Within a block of the Pure Heart Church are two large public high schools. Both campuses include well-designed Western-style buildings which appear to be of a vintage similar to that of the church buildings. These schools may well be successors of these prestigious mission schools.

Every Sunday morning at 7:30am and again Sunday evening the church bell sounds, oddly without resonance, tolling 20 times. Looking down from our balcony, we can see throngs of people entering through the church’s two gateways and moving about in the courtyard. Again on Wednesday evening, the church opens for services. 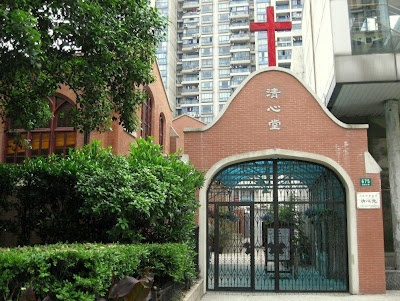 I’ve had a look inside the surprisingly large sanctuary. The congregation sits in two wings; each canted toward a central platform with room for a large choir, organ, pulpit and alter. From our apartment, we often hear a crowd of voices raised in vigorous hymn singing. Unlike hymns from Western hymnals, the tunes are simple and Chinese people seem to have a culture that cultivates folk singing. But the contrast with singing during Western church services is remarkable.