India is a hard place to get around. Distances are large and the roads are very, very bad. No wonder Indian businesspeople use airplanes wherever they can. 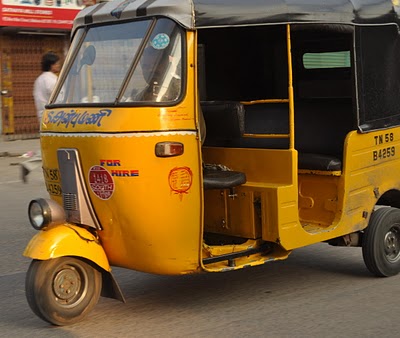 The smallest vehicle we’d typically use is the auto-rickshaw or tuk-tuk. These three-wheelers are basically a tin can on top of a small motorcycle. They are loud, polluting and slow, but very convenient. Drivers are experts at fitting small boxes between lanes of traffic, turning on a dime and often whizzing by cars and people with only a centimeter to spare. And remarkably, we found we could squeeze all our bags and ourselves into one of them. In several cases where there was no alternative, we took a tuk-tuk twenty or thirty kilometers across the countryside.

Automobiles are widely available for rent by the day. For less than the cost of a US rental car, one can hire a car with a driver who knows how to negotiate the cows, people and other obstacles that clutter an Indian highway. Lanes are for reference only and drivers pass on curves with more reliance on their horns than on visibility. The cars are usually recent Tata models, but when saving money one can also get a more classic look. Although the following Ambassador looks like it drove out of a time machine, it came off a local assembly line new in 2008. 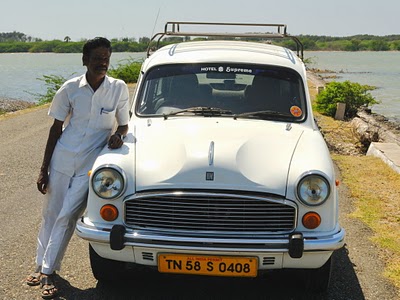 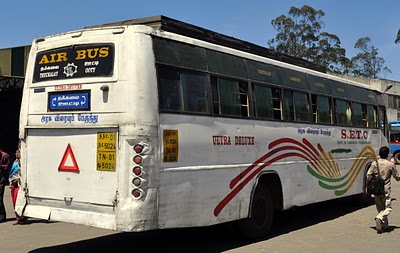 Buses are everywhere, both in towns and across the countryside. Most look like they were riveted together out of sheet metal, which conveniently makes them easy to fix after their frequent crashes. Inside, they have the upholstery of an American school bus and sometimes the “feature” of a DVD playing Bollywood gangster flicks at high volume. Because we value our eardrums and longevity, we took as few buses as possible. 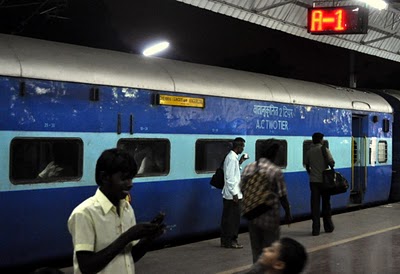 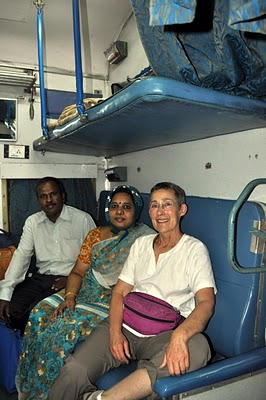 Trains are the way to go as long as you’re not in a hurry. The Indian State Railway network is the second largest in the world, and they move a lot of people around the country. Running on wide-gauge rails, Indian train cars are huge, sleeping six people in three-tier compartments, plus two more lengthwise across the aisle. Relatively comfortable air-conditioned cars are available. Trains run slowly, often stopping for a half an hour or more to let others pass. 400 kilometers is typical for an overnight journey. But despite all this, they work and they are reasonably safe.

I think I’ve finally got the hang of making a train reservation. This can be done either by sitting in a long line in the advanced booking office or by using the railway’s website. The website is more convenient because reservations can be cancelled online rather than by standing in another line at a station that might be way out of the way. Even so, the railways’ website is a disaster, often unavailable or timing out faster than one can complete a single booking. The website is run on underpowered servers that crash daily at 8am when the next day’s tickets go on sale. But it’s worth a few hours online to be assured of a bed on a moving hotel that isn’t likely to have a head-on collision with a tuk-tuk.