While we were in Kochi, a taxi driver told us about a festival happening at a beach village 16 kilometers to the north. We were initially skeptical but decided to take the chance on traveling up in the sweltering heat of the afternoon. We were glad we did.

The festival was in full force when we arrived. Several thousand people were gathered around a small temple and we could hear the sounds of music and fireworks from afar. 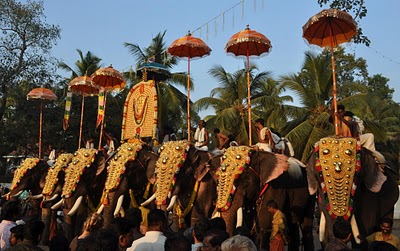 The centerpiece of the festival was two teams of seven elephants each. Elephants are sacred due to their association with Ganesh, and large temples often have a temple elephant who delivers blessings with his trunk in exchange for a few rupees. But here they had assembled 14 of the huge animals with gold-colored trunk ornaments and colored tassels. Three people stood on top of each elephant with ceremonial parasols and yak-hair shakers. 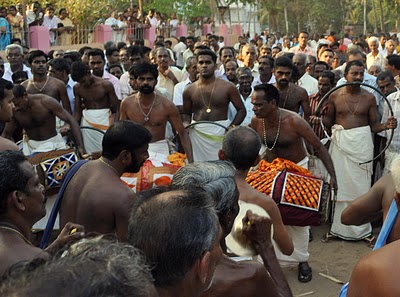 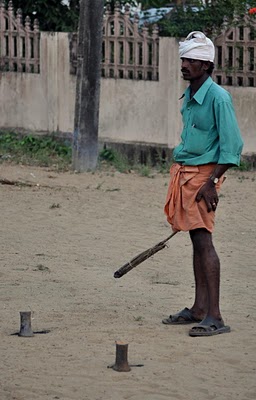 In front of each team of elephants played a band of drummers, trumpets and double-reed horns. Each drummer would improvise a few seconds, and the others would answer. The trumpets and horns blared single notes repeatedly as the intensity grew. To each side of the temple, fireworks wallahs set off explosions every few minutes. These bombs were capped metal containers about 15 centimeters high, which they filled with gunpowder in a tent nearby. The man lit their fuses from less than a meter away. The temple elephants seemed quite used to all the noise. 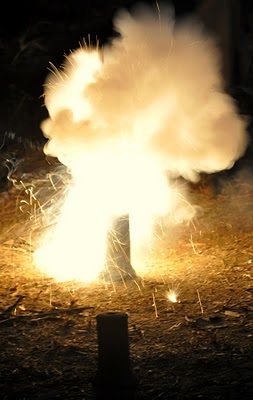 After dark was the real fireworks show. It began with a string of thousands of firecrackers and cherry bombs that stretched most of the way around the temple. I tried to film a video, but it was so loud that I had to cover my ears. This led to a full fireworks show, with rockets launched from ten-centimeter-diameter pipes. Safety precautions were limited to a rope and fence about 5 meters away, and the fireworks professionals were much closer than that. My dad would have enjoyed my front-row seat. 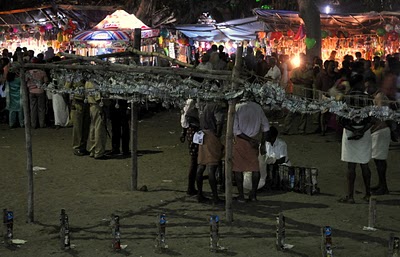 For a real blast, play this video: