Our multiple-entry Chinese visas required us to leave the country every 90 days. Because we were staying in Kunming for over five months, we had to make a short trip outside the country in the middle of our stay. Cheapest would have been Hong Kong, which is considered separate for visa reasons, but we decided instead to go to Laos, where we had never been.

From Kunming, Laos is a short 90-minute plane flight or a grueling 24-hour bus ordeal over terrible roads. We took the plane. 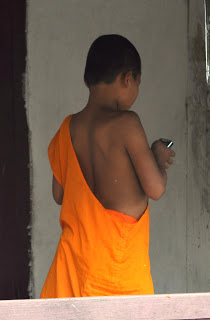 We spent most of our time in the old capital Luang Prabang, now a charming provincial town with excellent French restaurants.  Luang Prabang has a large number of Buddhist temples and monasteries, with active communities of young monks with cell phones. Most are built in a style close to temples in Thailand, but there is considerable diversity. 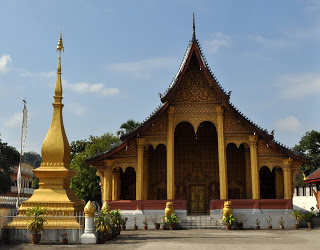 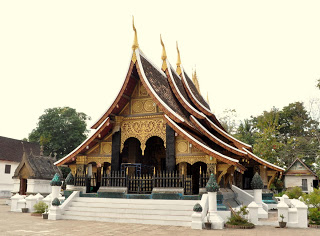 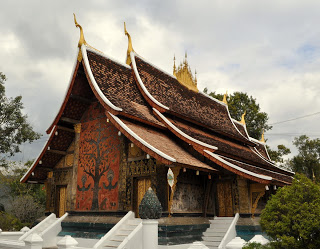 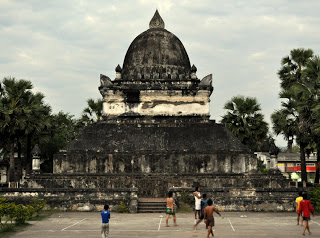 One had a painting that had survived without being “restored.” 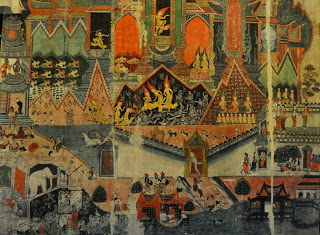 The old royal palace still stands as a museum in a lovely park in the center of town. 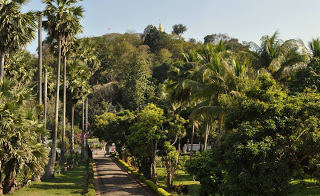 Bridges connect the town to houses across the river. 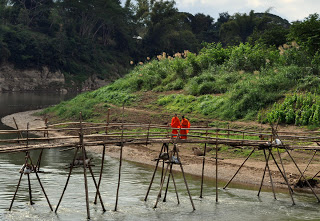 Luang Prabang has a beautiful custom that is sadly being destroyed by tourism. Every morning at dawn, the monks of all the monasteries walk through the center of town and accept sticky rice and other alms from townspeople. Monks give excess rice back to poor children along the route. Local people still participate as they have done for centuries, but unfortunately they are now outnumbered by tourists trying to have an “authentic” experience. I took these pictures from a respectful distance. 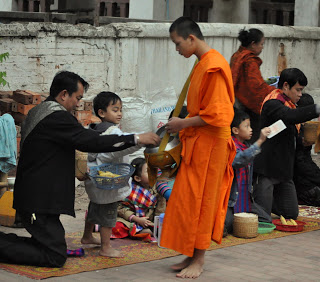 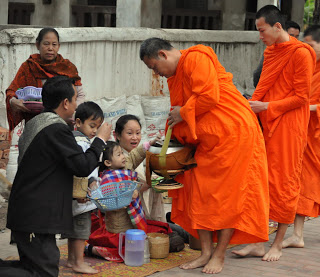 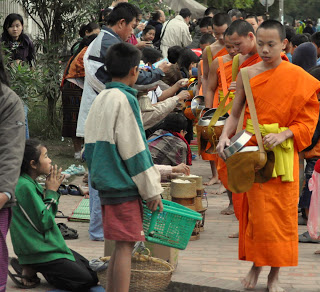 We took an excursion to a cave a few hours up the Mekong River. 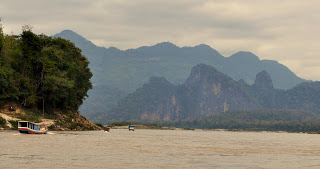 The cave and scenery were nice, but the real adventure was the transportation in small gasoline-powered long boats. 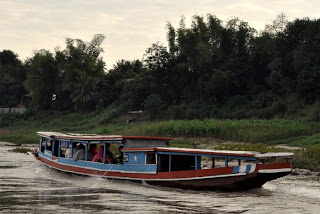 Our first boat pulled off 20 minutes into the trip and transferred us to a friend’s craft, which the driver billed as a “luxury boat”. The luxury boat, however, seemed to make worse time upstream than any other. Then, on the way back, the engine died shortly above some rapids. The visibly rattled driver did what he could but finally ended up on some rocks. Unfazed, he did some engine work and then lifted us off the rocks once he was confident he had repaired the engine. He left his navigation pole on the rock as a memorial. 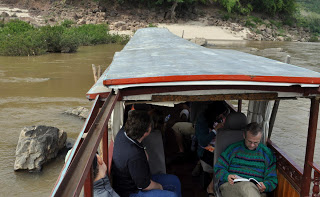 We spent our final night in the new capital, Vientiane, which has more great French restaurants but very few historical buildings.

The most interesting site is 6 kilometers outside of town and visited by few foreigners. When the CIA pulled out of Laos in 1975, the new president Kaysone Phomvihane set up his residence in the old compound. Unlike the leaders of some of his crazed neighbors, Kaysone ran Laos with a modesty and pragmatism that left it well place to rejoin the international community ten years later when he convinced his colleagues to follow the quasi-capitalistic reform policies of Deng Xiaoping. When Kaysone died in 1992, the government preserved his house just as he left it, right down to the standard US Army furniture. We could have been in Kansas except for the steady stream of Laotian schoolchildren coming to pay homage to the father of their country. 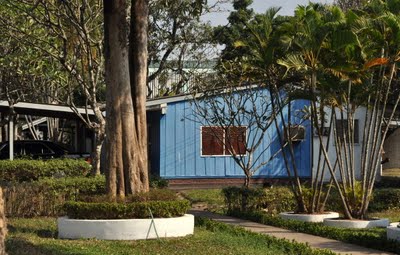