The Times of India, 2/23/10, dateline Mysore: The police launched a fitness training program for their personnel. Over 70 personnel who have been found obese have been selected for training.

Despite a seemingly healthy traditional vegetarian diet rich in vegetables, grains, and legumes, middle-class mature adults, both men and women, tend to be quite fat.

There are probably multiple causes: increasing prosperity, abundant use of deep-fry as a cooking method and butter as an ingredient, sedentary life style, a cultural sweet tooth attracted to the wide variety of confections on offer in ubiquitous shops and food stalls specializing in sweets. 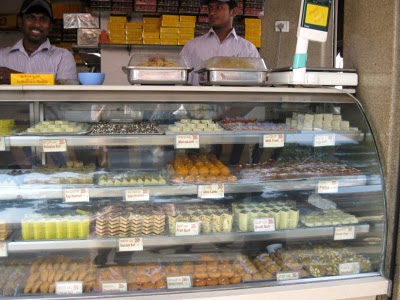 By contrast, mature adult villagers are thin as saplings. During the heat of midday, village men often hike their dotis or lunghis above the knee. Flesh seem to be stretched over nothing but sinew and bone. Perhaps body fat is a traditional cultural sign of wealth and status.

According to Wikipedia, obesity is epidemic in India. Among the causes may be the increasing consumption of processed foods. Additionally, many Indians carry a gene that predisposes for fat accumulation, especially around the middle.