Soon after arriving in India, we got an opportunity to attend an authentic kattai kuttu performance at an all-night village festival. 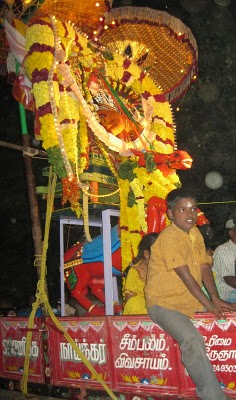 Kattai kuttu is one of several traditional Indian entertainments and is indigenous to Tamil Nadu state. A mixture of music, dance and theater, kattai kuttu performances enact well-known mythological stories from the Mahabharata, making the legends accessible to the people.

We arrived after dark and the festival, honoring the village goddess, was already in progress. A tractor pulled a large flower-decorated float carrying an image of the goddess and many children through town. A man with a long pole hoisted electrical wires so that the float could pass underneath.

Then villagers set off fireworks and tremendous firecracker ‘bombs’, all the more impressive because we could have walked right up to the exploding shells. 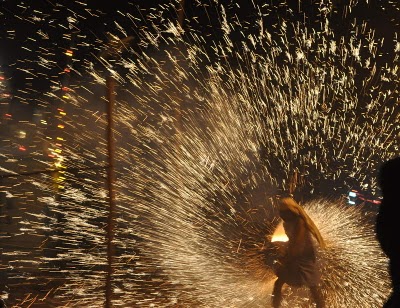 The kattai kuttu performance began at 11pm and ended at 7am without a break. Along with 200-300 villagers, we sat on the ground under the stars. From time to time we lay down and napped or got up and walked around. Some villagers slept, but a good core paid rapt attention through the night. Audience members sometimes came on the stage to give money to the actors playing their favorite deities. 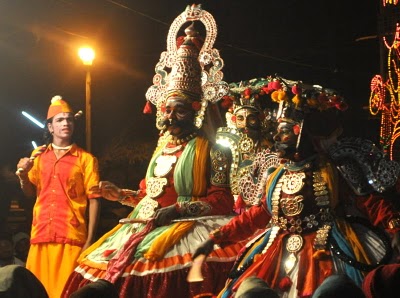 Performers wore elaborate makeup and costumes dictated by the kattai kuttu tradition. The actors spoke, sang and danced accompanied by a chorus of singers and an orchestra of a harmonium, finger cymbals, drums and a loud oboe-like instrument. 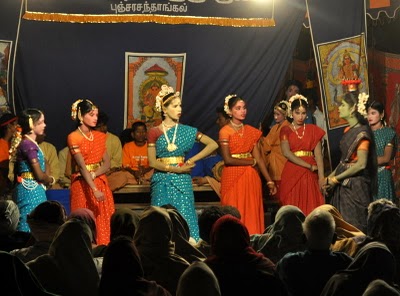 Most of the actors, chorus members and musicians were students at a boarding school founded by a hereditary kattai kuttu actor. The school’s mission is to pass on the kattai kuttu tradition and to provide young performers with an education so they can qualify for good jobs in India’s growing economy – performing alone will not provide a living.